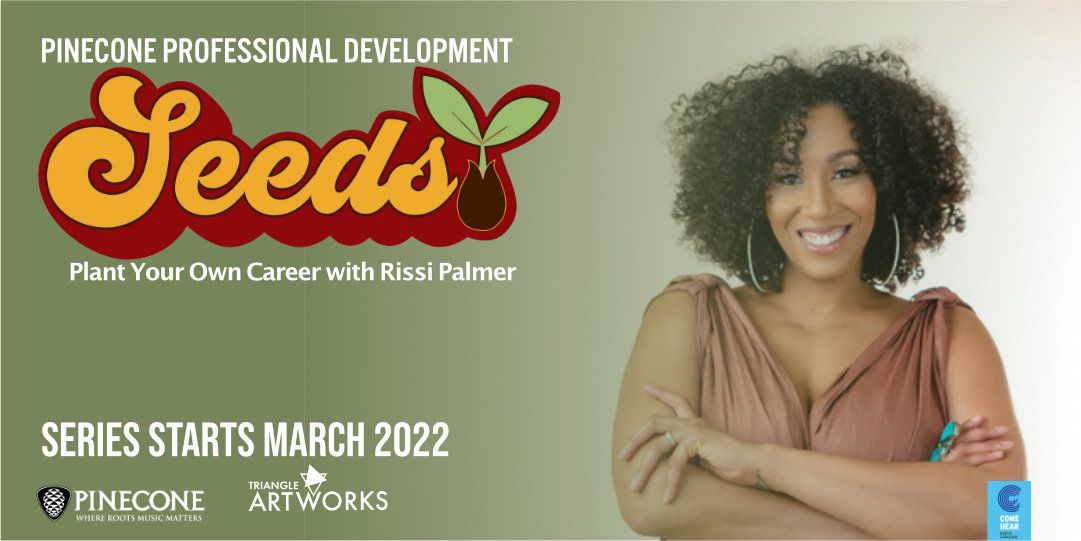 Do you want to chart your own musical career but wonder just how far you can go? In partnership with Pinecone and Triangle Artworks, join independent artist Rissi Palmer for a series of deep conversations with industry experts. From music publishing to digital streaming, from country to rock, these conversations will draw on personal experience and the best practices for independent artists. Each conversation will feature music business pros and allow participants to ask questions. Based on Palmer’s own experience in the industry and the idea that ‘no one will swoop in to save you, you have to save yourself’, these events will help you to find your own path as an independent artist.

From how to get bookings with Tess Mangum, to licensing your work for television with Aurelia Belfield, to legal advice from Gabriella Logan to showcases and art markets with Shana Tucker, these conversations will be illuminating and compelling. Click HERE to learn more and register now for these conversations.

May 15, 1-2:30pm-  Get That Booking: How to Make a Lasting Impression on Bookers/Curators w/ Tess Mangum 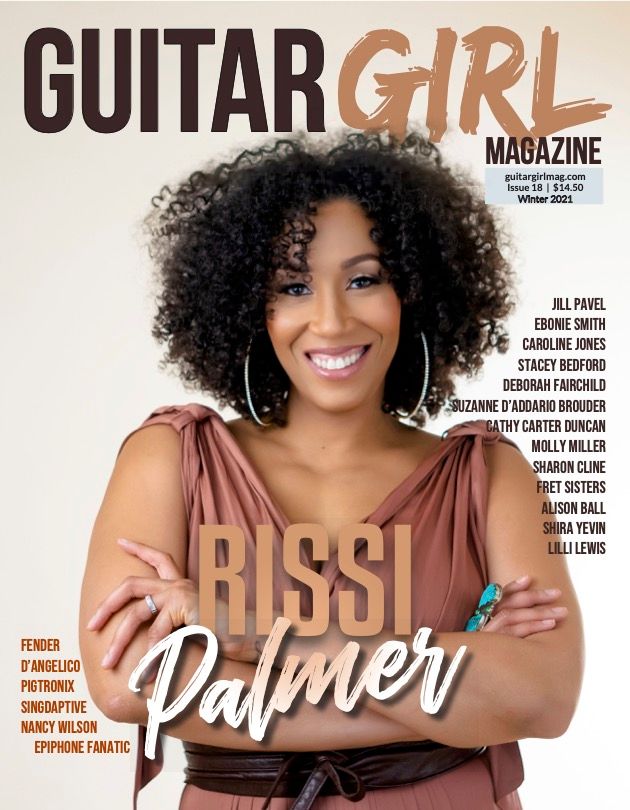 What a way to end the year! Thank you so much, Guitar Girl Magazine, I had no idea you were putting me on the cover. Check out the digital issue now HERE, physical copies will be available mid January…

NPR's The Best Music of 2021: How Black women reclaimed country and Americana music in 2021 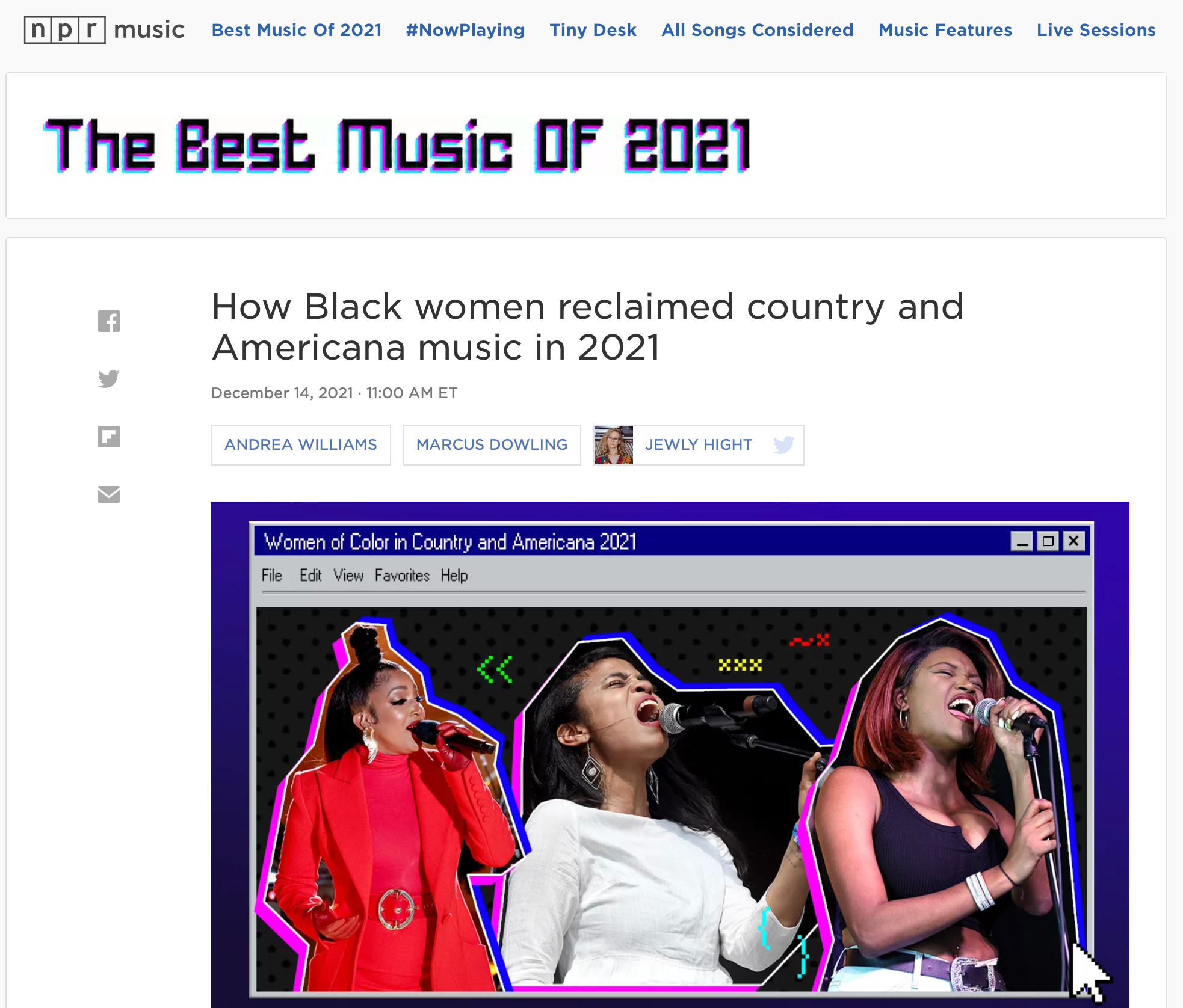 To see it all together is really something. I'm crying reading this, thank you for the acknowledgement and the reminder to keep fighting. My sisters showed out this year. Thank you Andrea Williams, Ann K. Powers, Jewly Hight, and Marcus K. Dowling. And this damn list of artists is like something out of my favorite playlist. To be named alongside these extraordinary women is unreal, read the whole thing HERE.

Rissi Palmer and Color Me Country take over The Long Road Festival in Leceistershire, UK in August 2022!!! 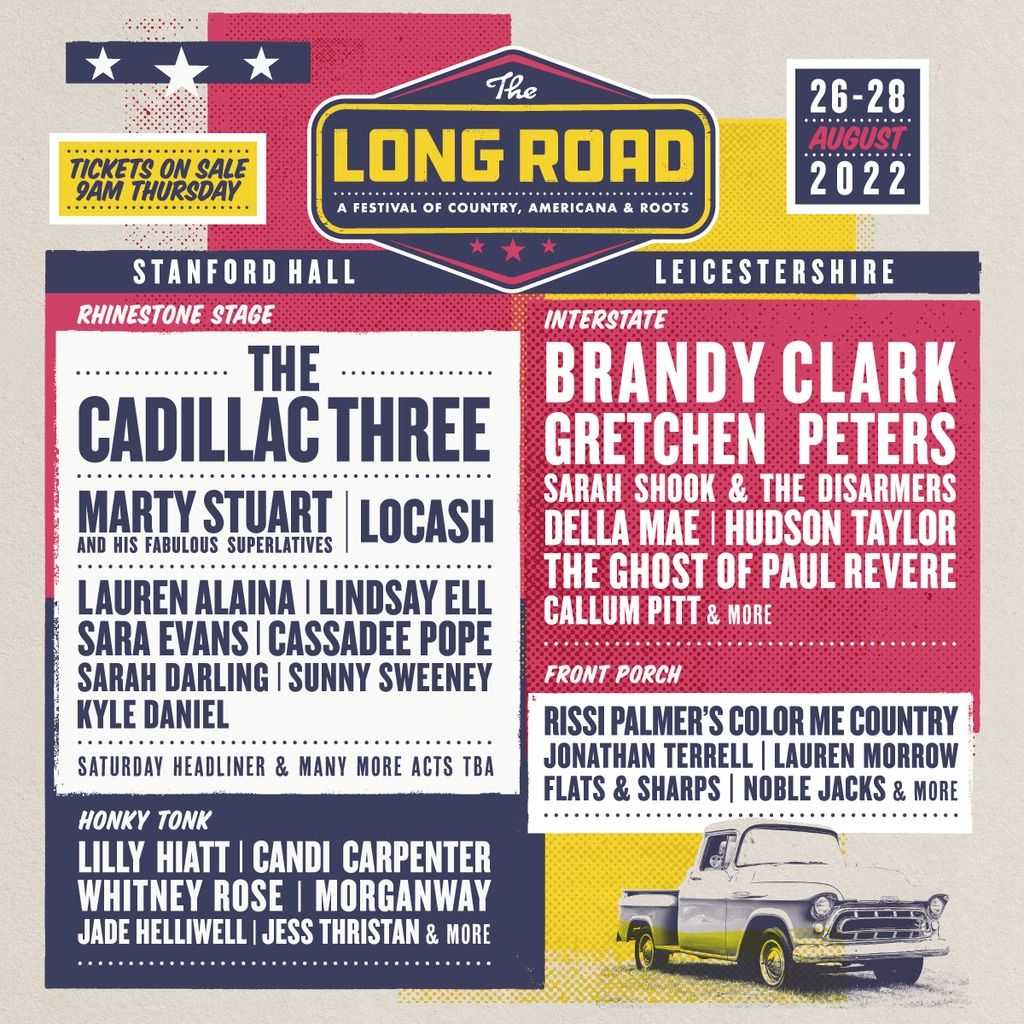 I’m taking the show to the UK, y’all!!! August 26-28, 2022, Color Me Country Radio and I will be at the Long Road Fest in Leicestershire!!! On August 27, The Front Porch Stage will be Rissi Palmer’s Color Me Country stage and I can’t wait to tell you who I’m bringing with me…announcement coming soon!!! Get your passport and come party with us… England ain’t ready 😉 Click HERE and get your ticket today!!! 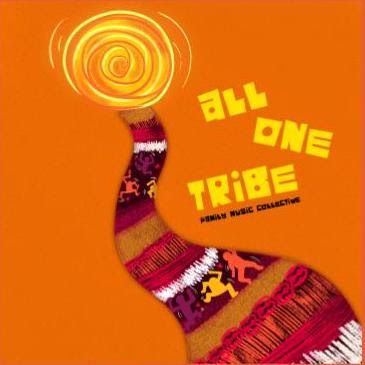 "Rissi Palmer (also) received nominations in the Best Children's Music Album category for her contributions on two of the category's five nominated albums: the 1 Tribe Collective album All One Tribe, on which she performed her song “Little Black Girl, Little Black Boy," and the 123 Andres album Activate, on which she sings on the duet “I Just Can’t Sit Down.” - Sarah Edwards, INDY Week 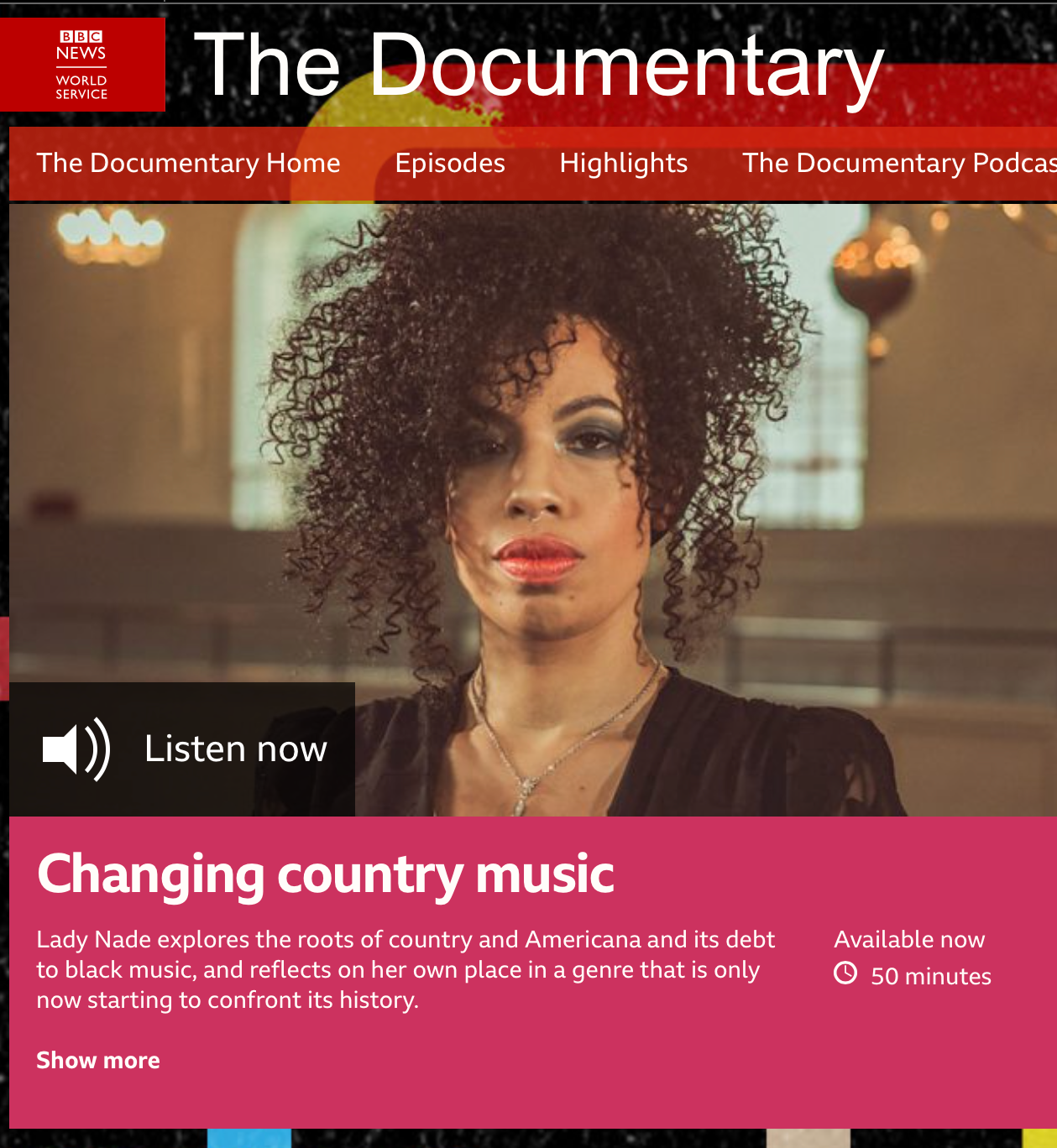 Of Billboard’s 2019 top 50 country artists, only one was black. Four were women. None of them were black women. Now, with country music under the spotlight as it never has been before, is it finally moving beyond its white, male image?

Americana-folk singer Lady Nade explores the roots of country and Americana and its debt to black music, and reflects on her own place in a genre that is only now starting to confront its history. You can hear the full documentary HERE. 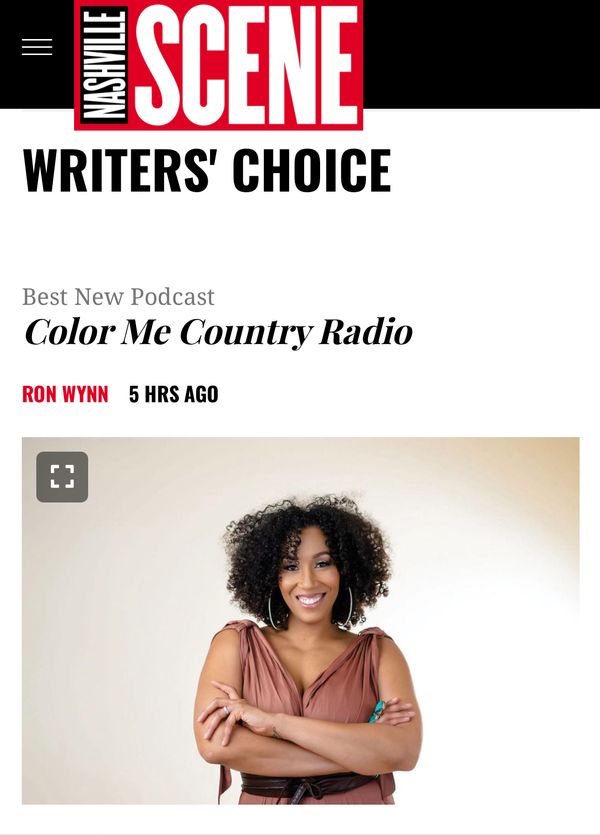 Ron Wynn has been a friend, an ally, and someone I respect for years, since my beginning in Nashville. That’s what makes this honor so much grander for me. Thank you to Ron and to the Nashville Scene for honoring Color Me Country Radio w/ Rissi Palmer, I’m so grateful. You can check out the entire piece HERE.

The Tennessean presents Hallowed Sound, including an essay by Rissi Palmer 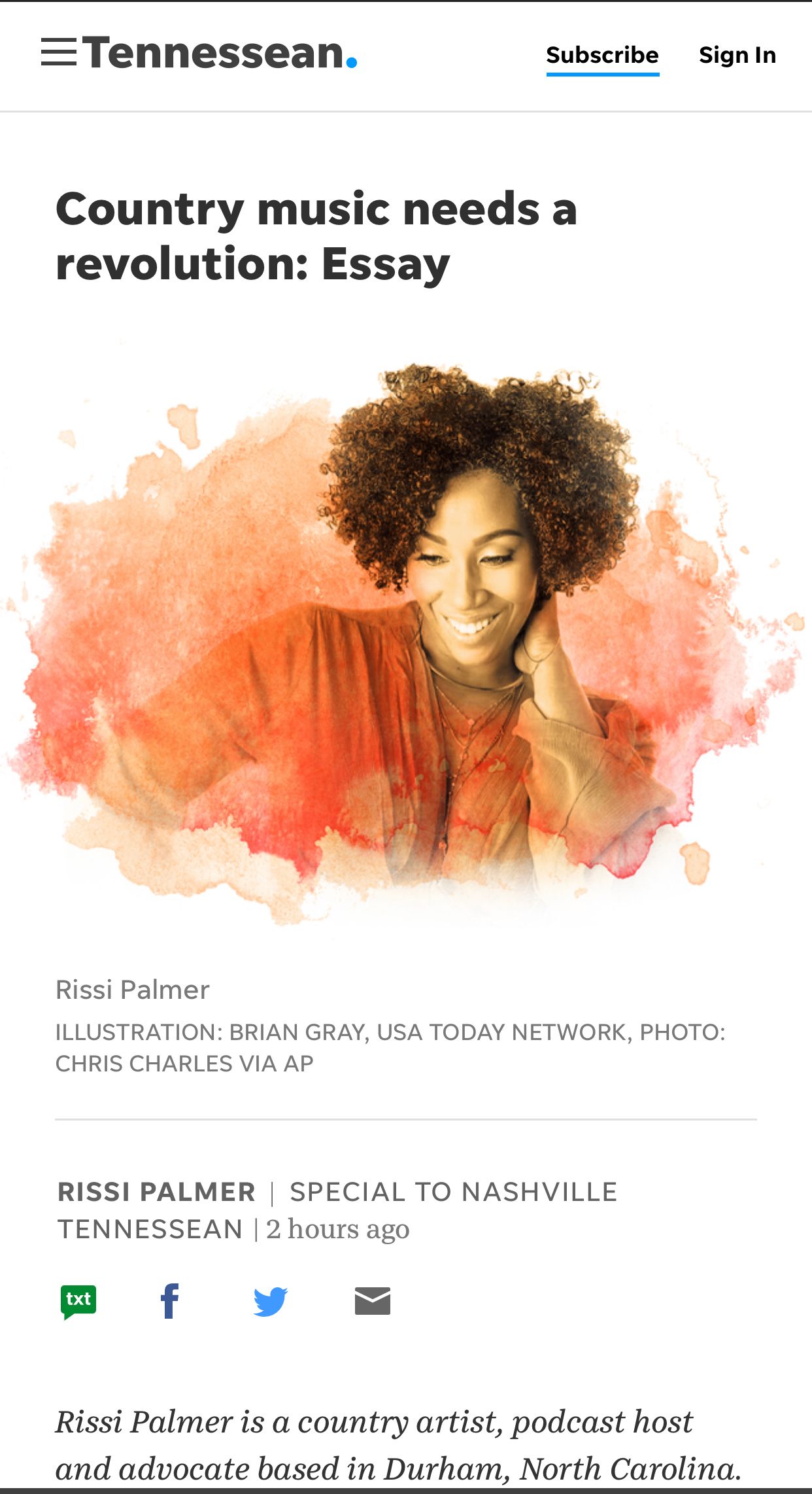 Thank you so much to the Tennessean, especially Matthew Leimkuehler, for asking me to reflect on the last year in Country music. Hallowed Sounds includes pieces from Mickey Guyton, Allison Russell, Willie Jones, Darius Rucker, and more. I'm honored to be included in those voices. You can read the essay in full HERE.

I had the privilege of interviewing the fabulous Jennifer Hudson about her starring role as Aretha Franklin in the biopic Respect for CMT Hot 20 Countdown… check it out!!!

Rolling Stone names Rissi Palmer as one of the Future 25 of Music!!! 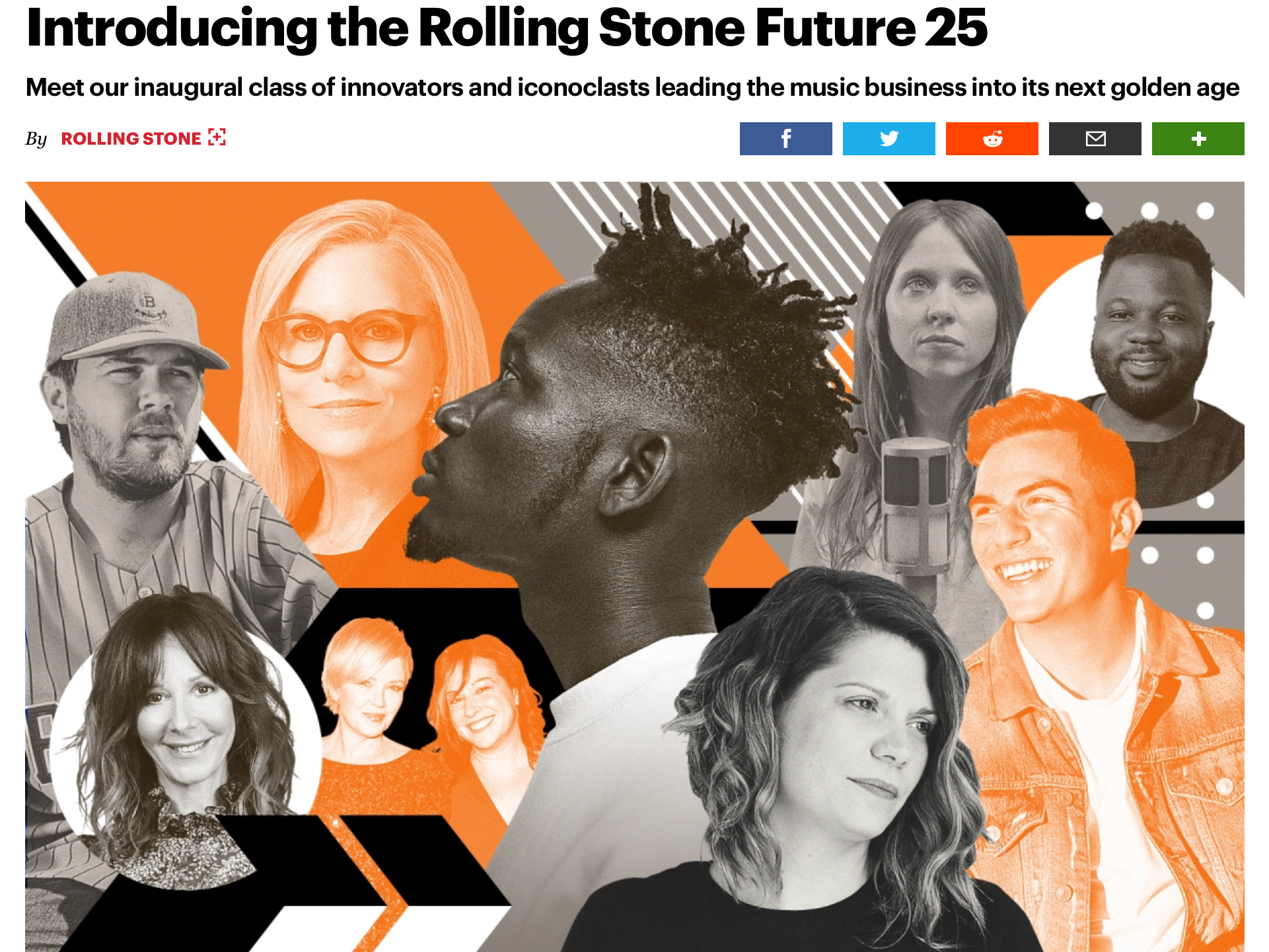 Words cannot even express what an honor this is!!! Thank you to Rolling Stone for including me in this list of Changemakers. You can read all about it HERE. 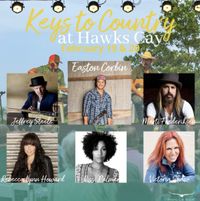 Keys to Country at Hawks Cay

Already booked for President's Day Weekend and want to be sure you can catch these performances? Reach out to our reservations team at reservations@hawkscay.com and we'd happy to help you upgrade your booking!

PLEASE NOTE: We will continue to have Covid-19 policies and procedures in place at each show depending on current conditions. At the moment these include the requirements that all attendees be fully vaccinated and masks must be worn except when actively eating/drinking, but these may change as pandemic conditions change.

All events will begin at 5:00 pm (with our full free BBQ dinner) except for the single Friday show on July 8th, which will begin at 6:00 pm. All events are being held INSIDE our Clayton, North Carolina home, in our living room.

Reservation windows will open at 5 pm on the following dates when the first email invitation is sent out:

Maia Sharp has had her songs recorded by The Chicks, Bonnie Raitt, Trisha Yearwood, Keb’ Mo’, Cher, Lisa Loeb, Art Garfunkel and more. Through it all, Sharp has continued to record her own albums, including eight solo releases, one collaboration with Art Garfunkel and Buddy Mondlock and her duo project Roscoe & Etta with Anna Schultz, her writing and production partner. Each release has been embraced by press and radio, leading to extensive touring and appearances on Mountain Stage, World Café, NPR’s “All Things Considered,” and “The Today Show” to name a few. Her latest album Mercy Rising is out now featuring the single “Backburner.”

Rissi Palmer’s gift lies in reaching across all music boundaries. While she made her mark in country music, she is equally at home in R&B, bringing the entire spectrum of popular music to bear on her own sound – Southern Soul. In 2007, Palmer released her debut album, full of charting singles like “Country Girl,” “Hold On To Me,” and “No Air.” Since then, her musical career has taken her across the country, sharing stages with Taylor Swift, The Eagles, Chris Young and more as well as features on two Grammy-nominated albums. Palmer is a passionate voice for country artists of color and those who have been marginalized in mainstream country music. She hosts her own radio show and connects with fans and artists alike to work toward equality in the genre.

MerleFest, considered one of the premier music festivals in the country, serves as an annual homecoming for musicians and music fans. Held on the campus of Wilkes Community College in Wilkesboro, North Carolina, MerleFest was founded in 1988 in memory of the late Eddy Merle Watson, son of American music legend Doc Watson. MerleFest is a celebration of ‘traditional plus’ music, a unique mix of music based on the traditional, roots-oriented sounds of the Appalachian region, including bluegrass and old-time music, and expanded to include Americana, country, blues, rock and many other styles. The festival hosts numerous artists, performing on 13 stages during the course of the four-day event. The annual event has become the primary fundraiser for the WCC Foundation, funding scholarships, capital projects and other educational needs.

Carolina Theatre's Family Saturday series presents the best in family entertainment. Rissi will be performing songs from her Children's album, Best Day Ever. 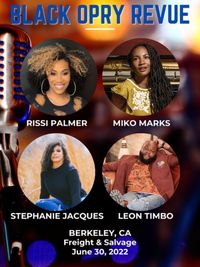 Folk All Y'all Presents Rissi Palmer 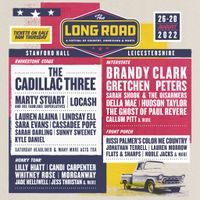